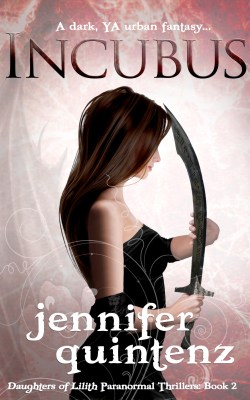 “The action sequences in this book were amazing. The ending will leave you reeling. This story is incredible and Jennifer Quintenz is an amazingly talented author… This book is an absolute MUST read!”
– Condygurl of the “Recent Reads” book blog

Braedyn Murphy used to think nothing important ever happened in her sleepy town of Puerto Escondido. But that was before she learned she was a descendent of Lilith, the mother of all demons.

Now Braedyn fights to protect humanity from the Lilitu – the beautiful, souls-stealing children of Lilith.

As she fights the Lilitu, Braedyn must also fight her growing love for her boyfriend Lucas – because giving in to temptation could end his life. Their only ray of hope is an angel’s offer to make Braedyn human, but it’s an offer she can’t accept until the world is safe from the Lilitu.

Braedyn knows she’s a key player in this ancient war… but she just might be humanity’s best hope of surviving the final battle for Earth.